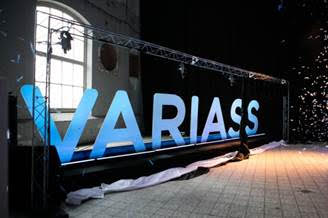 On October 13, Variass celebrated its 25th anniversary. The jubilee party was celebrated in the Oude Suikerfabriek in Groningen with an afternoon program for invited guests and a party for staff and companian in the evening.
In the afternoon, there was a festive reception by chairman of the day Ebel Jan van Dijk and Henk Smid.
Further on the program  was Erwin Witteveen as speaker with a fascinating story about our network society and there was an in-depth forum with FME chairman Ineke Dezentjé Hamming and Kor Visscher, chairman of Innovation Cluster Drachten and director of Philips in Drachten. In the forum, the vision was shared how to motivate and retain the right technical staff.

In the Oude Suikerfabriek, the new logo of Variass was also revealed. Simultaneously with the development of the new corporate identity, Variass has also developed a new website and company film. On Monday, October 17th, the staff were surprised by a detailed house style metamorphosis in Drachten and Veendam.