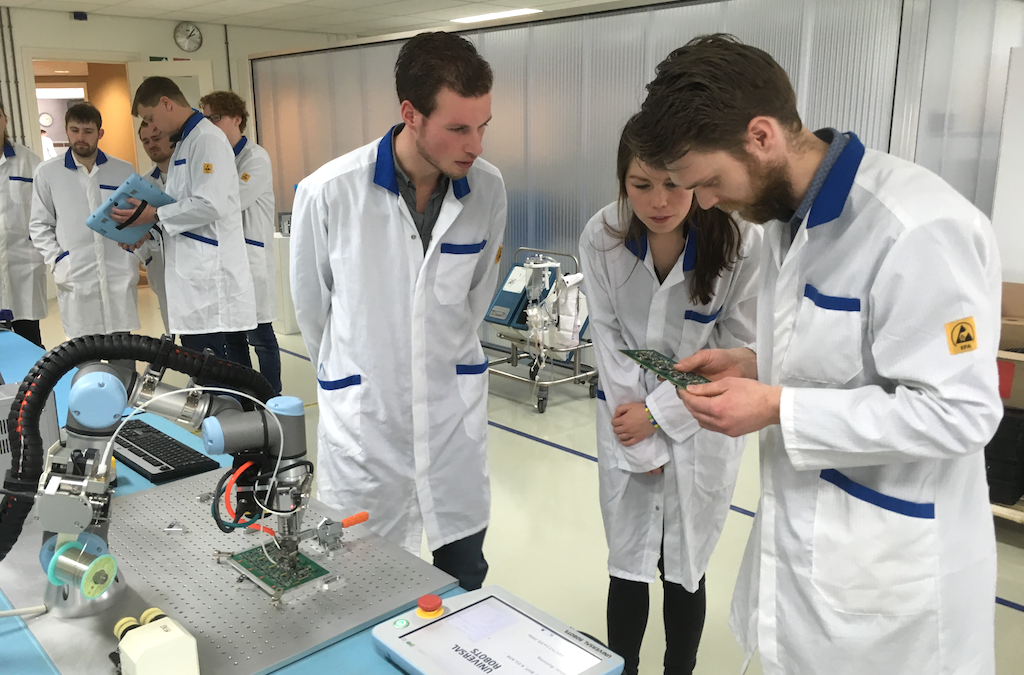 During the annual high tech safari for students, various high tech companies from the Innovation Cluster were visited. In three buses, the students of the study association “Fysisch-Mathematische Faculteitsvereniging”, the study association “Technisch Fysische Vereniging ‘Professor Francken’” and the study association “Kunstmatige Intelligentie en Informatica”, tracked down the traces of sensoring & big data, visual intelligence and robotics. First they visited Resato in Assen where they received a demonstration of water jet cutters and extreme high pressure equipment. From there to BD Kiestra in Drachten to see for themselves what visual intelligence in combination with big data can do for accelerated detection of diseases.
At Photonis in Roden, the students could look through of a super night binoculars what that might mean for the military capabilities of this technique. That lives can also be saved with visual high tech was shown at Ziuz in Gorredijk, where smart software linked to super lenses makes it possible to check medicines on correctness and quantity. The introduction of our big 5 continued at Neopost in Drachten. There the students saw how smart technology and robotization increased the speed of packaging goods 10 times faster with 50 percent volume gain. YP Your Partner demonstrated the unlimited applications for industry and business of augmented reality using the Hololens of Microsoft. “It’s as if you literally add something to reality.”
At Variass in Drachten, the students met “cobots “, robots working together with people in a safe way.
In conclusion, there was a tour at Philips in Drachten. First in the ICD Shared Facility Center where our 3D metal printer appeals to the imagination. Followed by a tour of the production of shavers in North-Holland’s most advanced “robot factory”