On June 18th, 2018, Variass Drachten was visited by Secretary of State (Economics and Climate) mrs Mona Keijzer. By invitation of the province of Friesland she got acquainted with the Innovatie Cluster Drachten.
A co-operation of 18 hightech companies in the Northern region of the Netherlands. 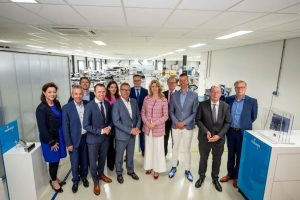 During her visit a presentation was given about the co-operation between Variass and Zius, who developed togehter the fieldlab IRIS within the Region of Smart Factory. The IRIS is a medical device to monitor the content of bags with medication in a quick and safe way.

She also saw a live demonstration of the Soldercobot, developed by Variass. The soldercobot solders customer specific electronic components.